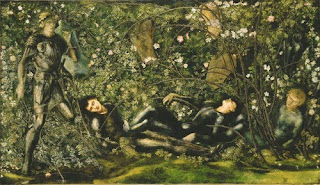 The Staatsgalerie Stuttgart has on through 7 February 2010 an exhibition of Edward Burne-Jones (1833–1898), It’s a major show, but not, as claimed, the first on this artist’s work ever to be presented in Germany. Some idea of the content and theme can be found in the web announcement:

Myths, legends and sagas come to life in his splendid narrative cycles which, as the focus of the show, will lure visitors into magical worlds. The tale of Sleeping Beauty, the saga of King Arthur and the Knights of the Round Table, the myth of the demigod Perseus who beheaded the horrible Gorgon Medusa and liberated Princess Andromeda from the clutches of a sea monster: it was not only in large-scale paintings and tapestries that Burne-Jones depicted these and other stories. Literary motifs of this kind also figure in his designs for stained-glass windows, ceramic tiles, furniture, book illustrations and other three-dimensional and textile works. Each of the new exhibition rooms on the ground floor of the Old Staatsgalerie will be devoted to a different sphere of his narrative universe.

As they note, “Burne-Jones shared his appreciation of the applied arts as an agent unifying art and life with William Morris, one of the fathers of modern design. Not only were the two men close friends throughout their lives; they also worked side by side at Morris, Marshall, Faulkner & Co., founded in 1861.” The title of the exhibition comes, of course, from Morris’s epic poem, The Earthly Paradise (1868–1870), from which Burne-Jones derived inspiration for his narrative cycles

The exhibition is “being realized under the sponsorship of the British ambassador to Germany, Sir Michael Arthur.” It will be on view at the Kunstmuseum Bern from 19 March to 25 July 2010.