The Kelmscott Chaucer, the masterpiece of William Morris’s Kelmscott Press, published a few months before Morris’s death in 1896, was described by its illustrator, Edward Burne-Jones, as a “pocket cathedral.” How big a pocket might hold the original (a folio) is hard to imagine but we have received word that there is a version which will fit into a reticule—and leave room to spare. In a world where Morris products of all sorts abound, B. B. Miniatures, of South Africa, has produced one of the smallest–and oddest, an “open book” version of the Chaucer measuring ca. 1.5 in. wide and 1.25 in. wide. Described as being “bound” (quotation marks ours) in leather, the volume joins the maker’s little library suitable for a dolls’ house. Other titles available include the Gutenberg Bible, Mrs. Beeton, various medieval manuscripts, and albums kept by a naturalist and a stamp collector. The charm of the miniature Chaucer is slightly lessened when one learns that because of the reduction, the open pages can’t be read. But then critics of the real Chaucer have, on occasion, said the same thing. For more information go the B. B. Miniatures web site. 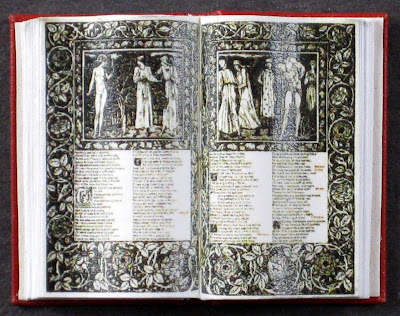 (Thanks for Matthew Young for the photograph.)