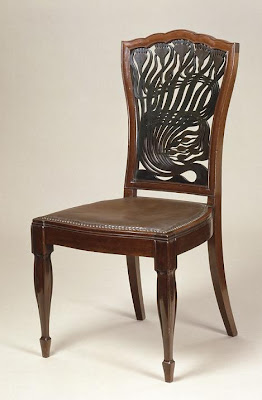 The Huntington Library and the Los Angeles County Museum of Art recently announced the joint purchase of an iconic chair designed by Arthur Heygate Mackmurdo (1851–1942). One of only five chairs known to exist, the piece is one of only two in the United States went on view in the Design Reform movement rooms of the Huntington Art Gallery in late November. After two years at the Huntington, it will shift to LACMA’s newly reinstalled galleries dedicated to the Arts and Crafts movement.

Elaborately carved from mahogany with fluid tendrils forming the back, the chair is considered a key precursor of the Art Nouveau movement.

“When this extremely significant piece of revolutionary design linking the social and aesthetic thinking of William Morris with European Art Nouveau became available, we knew we should try to bring it to public view in Southern California,” said John Murdoch, the Hannah and Russel Kully Director of Art Collections at the Huntington. “And the most sensible way to do that was to join forces with LACMA. It simply seems the smartest way to build strength in depth when neighboring institutions collect in the same area.” The Huntington has a significant Arts and Crafts collection, with many works by William Morris and the architcts Greene and Greene.

“The word iconic has been so overused that it takes a work of art like this chair to restore its meaning,” said Wendy Kaplan, department head and curator of decorative art at LACMA. As Kaplan explained, the chair created a sensation when it was presented to the public at the landmark Inventions Exhibition in Liverpool in 1885. The press at the time generated an immediate buzz. Fifteen years later, they were still writing about it: the Studio magazine declared in 1899 that its “elaborately fretted back . . . and type of floral form” was the precursor of Art Nouveau. The renowned art historian Nikolaus Pevsner included Mackmurdo in his 1936 work Pioneers of Modern Design.
Mackmurdo was both an architect and designer who traveled with John Ruskin, one of the inspirational forces behind the Arts and Crafts movement. By the early 1880s he was a disciple of William Morris and the predominant founder of the Century Guild in 1882, an association of artists and entrepreneurs that attempted to realize the ideals of Morris by bringing the highest levels of artistic creativity to objects for the ordinary home. The chair dates from the very beginning of this enterprise and is one of relatively few pieces to bear the CG stamp.
“It is both a ravishingly beautiful and fascinating object,” said Catherine Hess, chief curator of European art at The Huntington. “This chair represents the first manifestation of a new design movement that emphasized sinuous, organic forms. Amazingly, it dates a full ten years before this movement, the Art Nouveau, emerged on the European continent. It also provides an extraordinary educational opportunity for all our audiences—including visitors looking to better understand how art movements evolved and why things look the way they do.”