When the Tampa Bay Hotel opened in 1891, hotel guests were reading Robert Louis Stevenson, Thomas Hardy, and George Eliot and talking about the latest paintings by James McNeill Whistler and John Singer Sargent. They congregated on the veranda and in the Grand Salon to recite the poems of Alfred Lord Tennyson and chuckled with amusement at Oscar Wilde’s witticisms. These celebrities and their works were part of their lives. Today, Museum guests will laugh and gossip as they explore the world made relevant by these famous artists and writers.

The Henry B. Plant Museum will soon present an exhibition that examines noted Victorians through portraits. Facing the Late Victorians: Portraits of Writers and Artists from the Mark Samuels Lasner Collection will provide the opportunity for visitors to come face to face with famous British poets, painters, novelists, playwrights and illustrators. The exhibit opens 5 March and continues through 5 June 2010. 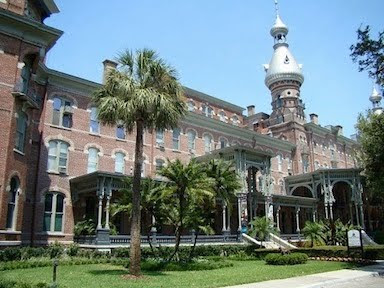 This exhibition will take audiences back more than one hundred years to explore a phenomenon that will seem astonishingly modern and familiar. Like the world we know now, Britain at the end of the nineteenth century was a nation filled with images. Whether circulating by means of posters, books, newspapers, magazines, cards, and advertisements, or hanging on the walls of art galleries and of private homes, images were everywhere. As is true today, what people most wanted to see then were images of faces and bodies, especially those of celebrities. A visual industry arose in the late Victorian period to satisfy the demand for portraits in every medium and to reproduce these on a mass scale. Pictures of monarchs and stage performers, of course, were in great demand; more surprisingly, so were portraits of what we might call cultural celebrities—that is, writers and artists. Figures such as Oscar Wilde, Robert Louis Stevenson, Aubrey Beardsley, James McNeill Whistler, W. B. Yeats, “George Eliot,” and the feminist “New Women” writers were as famous for the way they looked and dressed as for anything they created.

Writers and artists trafficked in commodities, and they became commodities. Their portraits also provided material for other workers in this industry, such as caricaturists, who knew that the public took just as great a delight in seeing its cultural heroes skewered as idealized. These caricature artists, in turn, became celebrities themselves thanks to the “New Journalism,” which was eager to circulate unflattering images of the same poets and painters it made famous.

Facing the Late Victorians features portraits of dozens of well-known figures such as George Bernard Shaw, J. M. Barrie, H. G. Wells, Arthur Conan Doyle, Thomas Hardy, Henry James, and John Singer Sargent, who dominated the world of the arts, along with pioneering children’s book authors and illustrators, such as E. Nesbit and Kate Greenaway. Many of these are rarely seen images, such as Max Beerbohm’s savage caricature of Oscar Wilde’s head, which seems to decay before our eyes faster than did Dorian Gray’s face. But the show ranges widely to include photographs and drawings of many lesser lights whose work was important in advancing British art and literature—once celebrated writers such as the feminist novelist Olive Schreiner and the Catholic poet Alice Meynell, as well as the artists Ida Nettleship and William Rothenstein.

Of special note is a rare etching of famous actress Sarah Bernhardt, who gave her farewell performance at the Tampa Bay Hotel’s casino in 1906.

Thursday, 11 March 2010, 4.00-5.15 pm, Reeves Theatre, Vaughn Hall, University of Tampa
In conjunction with the annual Nineteenth Century Studies Association conference, hosted at the University of Tampa, this roundtable discussion will include exhibition curator and noted scholar, Margaret D. Stetz, Professor of Women’s Studies and Humanities at the University of Delaware. Conference registrants and Museum members only. The NCSA conference, “Theatricality and the Performative in the Long Nineteenth Century” takes place 11–12 March.

A lavishly illustrated book by Margaret D. Stetz, published by the University of Delaware Press, accompanies Facing the Late Victorians. Copies are available for purchase in the Henry B. Plant Museum Store.

For an illustrated review of the Grolier Club version of this exhibition, see Maureen E. Mulvihill’s essay for the Victorian Society in America’s March-April 2008 e-newsletter.

Facing the Late Victorians is underwritten by Mrs. (Jean) Joel Mattison and by J. Thomas and Lavinia W. Touchton.

The Henry B. Plant Museum interprets the turn-of-the-century Tampa Bay Hotel and the lifestyles of America’s Gilded Age. The Museum is open Tuesday through Saturday, 10 am to 4 pm Sunday, noon to 4 pm. Closed Monday. Admission is a suggested donation of $5 per adult, $2 for children under 12.
Illustrations: Sidney Starr and James McNeill Whister, James McNeill Whistler, ink, 1890 (Mark Samuels Lasner Collection, on loan to the University of Delaware Library); photograph of the Henry B. Plant Museum, Tampa, FL.