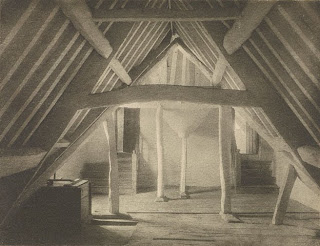 A series of wonderful photographs of Kelmscott Manor are featured in a new exhibition, A Record of Emotion: The Photographs of Frederick H. Evans, on view at the Getty Center in Los Angeles from 2 February through 6 June 2010.

Frederick H. Evans (British, 1853–1943) was best known for his photographs of medieval cathedrals, such as the image at right of England’s Wells Cathedral—arguably the best-known example of his work. Yet Evans was also accomplished in the areas of portraiture, landscape, and photomicrography (photography made using a microscope), and he brought to each subject the same intensity that characterizes his cathedral images. He believed firmly that only a good negative would yield the perfect print, and his high standards for presentation extended to the elaborate mounting of the actual photographs. Using both a “straight” approach (not altering his negatives) and pictorial sensitivity to subject and style, Evans’s work, created more than 100 years ago, continues to move and inspire.

In this exhibition, Evans’s cathedral subjects are displayed alongside rarely seen landscapes of the English countryside and intimate portraits of the artist’s family and friends, including writer George Bernard Shaw and artist Aubrey Beardsley.

Kelmscott Manor was built in the late 1500s adjacent to the river Thames. Since 1871 the Tudor farmhouse had been the summer home of William Morris, leader of the Arts and Crafts movement, and the Pre-Raphaelite painter Dante Gabriel Rossetti. Kelmscott Manor played a key role in Morris’s life; he used it in his novel about a utopian socialist society, News from Nowhere, and even named his private press after it.

In a series of photographs Evans made of Kelmscott in 1896, he approached his subject with a technique similar to that used for his cathedral pictures. He studied the location and considered the architectural space in a series of views that sought to capture the soul of the place—the unspoiled craftsmanship and organic feel that attracted Morris. Together the photographs are a symbolic portrait of William Morris.

Evans’s photographs of Kelmscott’s sparse loft are arguably some of the most spiritual of his career. Replete with symbolism—from the rough-hewn beams that suggest the Christian cross to the light that emanates from the doorway and beckons the viewer to ascend and cross the threshold from one room (or state of being) to another—the photographs have a mystical aura.