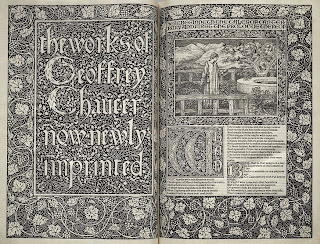 From 7 October 2010 to 30 January 2011 the Buffalo and Erie County Public Library, in Buffalo, NY, will hold an exhibition entitled The Ideal Book: William Morris and the Kelmscott Press. The library—let’s not forget that Buffalo was in the late nineteenth and early twentieth centuries one of the largest and most affluent American cities—has a remarkably rich and diverse collection of rare books and manuscripts. Most of the Kelmscott Press titles are there, including the famous Chaucer. Also on display as well will be a selection of books from active in the “revival of printing” influenced in some way by Morris, such as the Roycroft, Doves, Vale, Ashendene, and Essex House Presses. Visitors to the exhibition will have the opportunity to learn about the history of the Kelmscott Press, the life of William Morris, important individuals like Edward Burne-Jones and Emery Walker and the profound impact of Morris on the theories of book design in the 20th century. Free and open to the public.