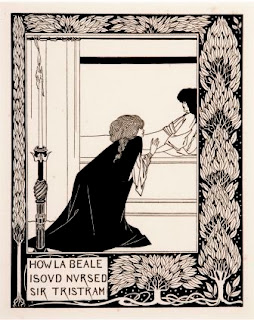 Two concurrent exhibitions at the University of Leeds, one of drawings and prints, the other of illustrated books, include work by William Morris and his contemporaries. Fancy and Imagination: Beardsley and the Book Illustrators is on at the Stanley and Audrey Burton Gallery, while the book show is being held across the street in the university library. Both run from 16 November 2010 through 12 February 2011.

Aubrey Beardsley, one of the most celebrated and controversial book illustrators of the Art Nouveau era. The exhibition presents Beardsley’s black and white world—at once wondrous, monstrous, and exotic—in context, celebrating the richness and variety of the medium of book illustration in Britain during the period between 1890 and the 1920s. The exhibition showcases works by other major illustrators of the era, including Arthur Rackham, Harry Clarke, Edmund Dulac, Walter Crane, Kate Greenaway, Kay Nielsen and Jessie M. King. Morris’s Kelmscott Press is also represented. The works exhibited alongside Beardsley’s illustrations and sketches provide an illuminating backdrop to the unique collection on display at the Stanley & Audrey Burton Gallery, a fine Art Deco setting within the landmark Parkinson Building of the University of Leeds. The artworks and books displayed come from the University of Leeds collections as well as from private collections.
The tragically short-lived Beardsley was born in Brighton in 1872; he died of tuberculosis at the age of 25 in 1898. He was a musical prodigy among other artistic talents, and at the age of nineteen he was warmly encouraged by the Pre-Raphaelite painter Edward Burne-Jones. His career as a book illustrator was first supported by publisher J. M. Dent. Dent commissioned the young artist to illustrate an edition of Malory’s Le Morte Darthur in neo-Kelmscott style; a massive and sometimes tedious task. While Beardsley found increasingly boring, his technique matured in the process, and the result brought him fame.

One of the rare treasures on display is an early sketch in a letter of 1892 to a school friend. Writing excitedly of being advised by Burne-Jones and starting work on Malory, Beardsley ends his letter with a self-portriat as a stick-man striding up the dark side of a mountain, on the other side of which is the sunny destination “Art.” Despite the few brief years he had ahead of him as an artist, he made it to the other side: at the peak of his career, he was the art editor of the iconic 1890s magazine, The Yellow Book. Here, he worked with well-established writers and artists like Henry James and Sir Frederick Leighton, as well as figureheads of the avant-garde, such as W.B. Yeats and Max Beerbohm. This side of the mountain, however, proved to be less idyllic than he had imagined as a young aspiring artist.
Most of the items in the present exhibition are drawn from the Fay and Geoffrey Elliott Collection, a generous gift to Leeds University Library in 2001. One of the most important motives for this gift was Fay and Geoffrey’s wish that their outstanding collection of manuscripts and printed works should become available to a substantial body of young people. Fancy and Imagination: Beardsley and the Book Illustrators makes a significant part of this collection accessible for wider audiences for the first time. A complementary display, exploring the publishers and printing methods of the 1890s and including further Kelmscott Press examples, is open to the public during the exhibition run in Special Collections at the University of Leeds. A catalogue related to the main exhibition and this complementary display will be available for sale.

The exhibition will be accompanied by a full programme of related events, including the recently launched Saturday Club, offering creative activities suitable for all ages.