Skip to content
The William Morris Society will sponsor a lecture by Christopher Wilk in New York on the 10th of September. Our co-sponsors are the Grolier Club, and the American Friends of Arts and Crafts in Chipping Campden, with the support of the Stickley Museum at Craftsman Farms. 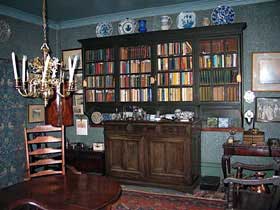 Sir Emery Walker, a distinguished printer and later the co-publisher of the Doves Press, was the man who provided both the inspiration and practical advice to William Morris to found the Kelmscott Press in 1890. Walker and Morris were close associates until Morris’s death and the latter said of his neighbor and friend that he “did not think a day complete without a sight of Emery Walker.” Walker lived on Hammersmith Terrace, West London, overlooking the Thames from 1879 until his death in 1933. His house, 7 Hammersmith Terrace, is without doubt, the most intact surviving Arts and Crafts interior in Britain. This is owing to the fact that the house was lived in continuously by Walker, by his daughter, and then by his daughter’s companion until 1999. This talk will focus on the Walker family, their house and its history—including its close association with William and May Morris, Philip Webb and with the Arts and Crafts in the Cotswolds—while also considering Walker’s crucial role in the Revival of Printing.

Christopher Wilk is Keeper of Furniture, Textiles and Fashion at the Victoria and Albert Museum and a trustee of the Emery Walker House.

Tickets $12 for members of the sponsoring organizations, $18 for others. To order send a check to William Morris Society, P.O. Box 53263, Washington, DC 20009 or go to www.morrissociety.org to pay using PayPal or a credit card.