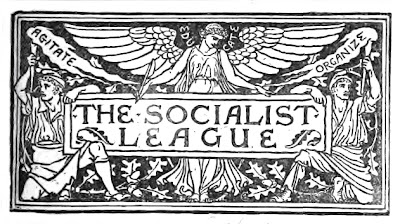 Since the month of May opens with Mayday and a flurry of international attention to workers, it seems a good month to reflect on William Morris and his work.  On seeing newscasts of workers marching in Munich and elsewhere on Mayday, I thought back to the May 1885 issue of Commonweal,* which demonstrates Morris’s commitment to causes that still animate May Day celebrations around the globe.
The May 1885 issue included two writings by Morris: Part 3 of his serial poem The Pilgrims of Hope and the article “Unattractive Labour.”  In the first, the protagonist and his life partner stand on London streets watching the parade that honors soldiers marching off to war with flags unfurled and music playing.  In Morris’s poem the shops and faces lining the street attract even more attention than the blaring sounds and colorful sights of a parade: “The gaudy shops displayed / The toys of rich men’s folly, by blinded labour made” and “Worn feet, grey anxious faces, grey backs bowed ‘neath the load.”  As Part 3 concludes,
War in the world abroad a thousand leagues away,
While custom’s wheel goes round and day devoureth day.
Peace at home!–what peace, while the rich man’s mill is strife,
And the poor is the grist that he grindeth, and life devoureth life?

Morris makes no attempt to heroize workers here, and in fact unsentimentally has his protagonist note the filth and stench of those who “from the lairs they had lain in last night went up in the wind.”  “Unattractive Labour” opens with the barren ugliness of most workers’ houses, in contrast to those of the wealthy able to spend enough to beautify their environments.  In Part 3 of Pilgrims of Hope, Morris both vividly evokes a scene and theorizes it, seeing in the common sight of a martial parade a microcosm of an entire system of capitalism hand in hand with an imperialist state.  Similarly, in “Unattractive Labour” he quickly turns to exposing the larger social and economic structures underlying what might at first seem a trivial point.
For workers’ unadorned homes are “but one of the consequences of wage-slavery. Until that wage-slavery was completed and crowned by the revolution of the great machine industries, there was some attractiveness in the work of the artisan. There is now none, or next to none and the reason why the ornamental wares above-mentioned are so adulterated is because the very ornament itself is but a part of the machine labour, made to sell and not for use whether it be done by human machines or non-human ones.”  Thus the sole hope left is “The hope of revolution, of the transformation of civilization, now become on the face of it a mere corruption and curse to the world, into Socialism, which will set free the hands and minds of men for the production and safeguarding of the beauty of life.”
Ever the artist as well as the revolutionary socialist, Morris ends his article by tapping the potential power of this pairing:  “to my mind the unattractiveness of labour, which has been the necessary outcome of commercial industry, will have played a great part in this revolution; the price which commercialism will have to pay for depriving the worker of his share of art will be its own death.”  The world has not followed the path Morris foresaw; but his vision of beauty as so radical a human need and social force that it can remake the world remains a powerful one.  And the beauty of Morris’s own socialist poetry and example of his life are reminders that art and social justice can indeed be joined.
Linda K. Hughes
* Both selections can be accessed online at http://www.marxists.org/archive/morris/works/1885/pilgrim/poems/poem3.htm and http://www.marxists.org/archive/morris/works/1885/commonweal/05-unattractive-labour.htm.