Chicago was cold and wet, with snow and slush everywhere. Instead of sidewalks there were slidewalks. Was it the plan of the MLA convention organizers to pick a location that kept people indoors? If it was, it didn’t work for the tried and true members of the William Morris Society. Wherever there is Morrisiana in an MLA city, you are sure to find a group willing to brave treacherous conditions to bask in the glory of arts-and-crafts architecture, design, and stained-glass. I was proud to count myself among them, slipping and sliding all the way.

The afternoon of Thursday, 9 January unfolded with a William Morris Society sponsored panel at the MLA: “Morris and Arts and Crafts in the Midwest.” I had the privilege of serving as moderator to an action-packed four paper panel. The first speaker was Sandi Wisenberg, co-director of the School of Continuing Studies at Northwestern University. The title of her talk was “The Politics of the Glessner House.” It was a talk that prepared us for our sojourn to Prairie Avenue later in the day.
It seems the patriarch of the Glessner family—John—made his money in the farm machinery business, merging his company with conglomerate International Harvester in 1902. As a testament to his success (and good taste I might add!), he had H. H. Richardson design a Romanesque mansion along Millionaire’s Row, gorgeously decorated in arts-and-crafts style (sadly, Richardson did not live to see the mansion completed). Wisenberg compared and contrasted the politics of Glessner with those of Morris, highlighting the contradictions between the two. Glessner, who was horrified by the Haymarket Riot, unwittingly supported the spread of trans-Atlantic socialism through his decorating decisions. I can only imagine the wry smile on Morris’s face—Morris, that man who simultaneously decorated the corridors of power while working to tear them down.
The second speaker—Barbara Johnson—prepared William Morris Society members for their tour of the Second Presbyterian Church. Johnson is a State of South Dakota Humanities Scholar whose documentary Light of the Prairie: South Dakota Stained Glass was nominated for an Emmy Award. It was exciting to hear about Johnson’s sojourns to places large and small to document stained-glass not only all over South Dakota, but the West.
Her knowledge and insight made our viewing of the Second Presbyterian Church’s stained-glass all the richer. No matter how good a photograph, it can never capture the true beauty and depth of stained-glass. You have to experience it in the moment. There’s an aura to stained-glass that changes and morphs before your eyes. We saw the stained glass as the sun was setting, with each passing minute bringing a new effect. The Second Presbyterian Church has two Edward Burne-Jones stained glass windows, both of which are located in the lobby. Of the two, I was particularly struck by the window depicting St. Margaret. The complex marriage of bold color with fine detail is Arts and Crafts style at its best. 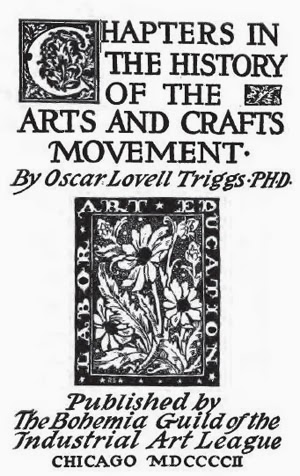 The third speaker was Elizabeth G. Browning, a graduate student in the history department at the University of California-Davis. She spoke about “Hull House and the Arts and Crafts Movement.” She focused, in particular, on the labor museum and how it presented the history of work from a distinctly Arts and Crafts perspective. Jane Addams herself had described the goal of her museum to be “imaginative uplift,” where art and work became one, whether it be though wood-carving, embroidery, or book-binding, all activities done on-site at Hull House. It was very clear from Browning’s talk that she is a young scholar whose future is bright. Too bad there is only so much time in a day because Browning made a tour of the Jane Addams Hull House Museum an enticing prospect.
The William Morris Society’s own Florence Boos gave the final talk of the panel. She talked about the US’s first William Morris Society, Chicago’s Morris Society, created in 1903 but lasting only until 1905. She focused in particular on some of the leading figures in the organization, including Oscar Lovell Triggs. Triggs was an integral part of Arts and Crafts movement in Chicago, but hasn’t been given his full due attention in the history of the Arts and Crafts movement. I am glad that Boos is working to correct this oversight. I know that she is working to turn her presentation into an article. I, for one, cannot wait to learn more about him and the other members of the first William Morris Society.
After the talks, William Morris Society members and guests convened for the two tours. After the events, I returned to my hotel exhausted but happy to see that even in the worst of weather, and over one hundred years after his death, Morris can still draw a crowd.