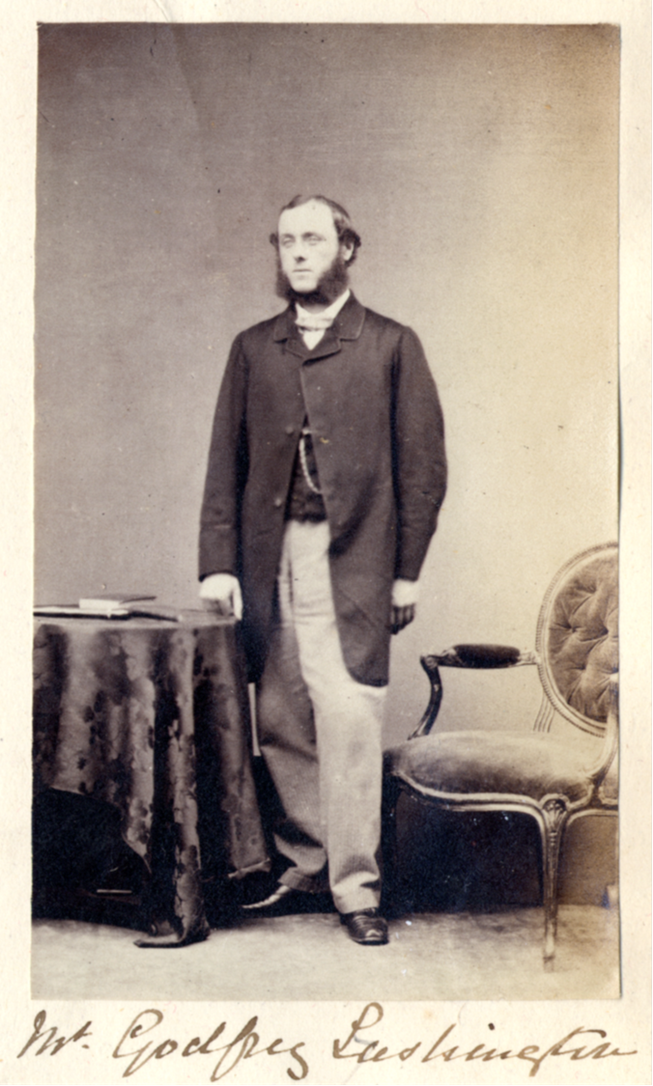 Dr David Taylor, Hon. Research Fellow, University of Roehampton; and Project Archivist, Lushington Archive, Surrey History Centre, gave a fascinating Morris-related talk at the “Places, Spaces, and the Victorian Periodical Press” conference at the University of Delaware. Here’s the abstract for the talk, which is called “Dreaming Spires and Radical Roots, Oxford in the 1850s: Godfrey Lushington and the Oxford and Cambridge Magazine.”

“The Oxford and Cambridge Magazine appeared in 1856. It was founded by William Morris and Edward Burne-Jones while both were students at Oxford University. They were joined in the venture by other undergraduates including the twins Vernon and Godfrey Lushington who became disciples of Auguste Comte and leading advocates of Positivism and the Religion of Humanity.
Although always known and recognised for their role in the attempt to spread Positivism during the second half of the nineteenth century, the Lushington brothers remained shadowy figures until my recent acquisition of the important Lushington family archive. My resulting doctoral thesis and ongoing work cataloguing the papers, is bringing the Lushingtons more to the fore of the stage in the cultural and intellectual world of the fin-de-siècle.
Whilst Vernon Lushington was busy at Cambridge attempting to win converts for Comte (and taking time to introduce Burne Jones to Rossetti, thereby setting in motion the development of the second phase of the Pre-Raphaelite movement), Godfrey was at Oxford where he fell in with Morris and other like-minded students.
The Oxford and Cambridge Magazine was devised by Morris and his friends as a successor to the short-lived Pre-Raphaelite periodical, The Germ. The enthusiastic students formed a ‘Brotherhood’ to take up the ideals of Rossetti, Holman Hunt, Millais and others who formed the original Pre-Raphaelite Brotherhood.  But the new ‘Brotherhood’ was not to be an imitation of The Germ. Its aim, in the words of Burne- Jones, was to be as a weapon in a ‘Crusade and Holy Warfare against the age,’ meaning specifically the appalling conditions of life in the great industrial areas and the indifference toward them of the upper classes, and more broadly the lack of idealism in contemporary society. In addition to the original P.R.B., the inspirers of the new group were Carlyle, Ruskin and Tennyson. 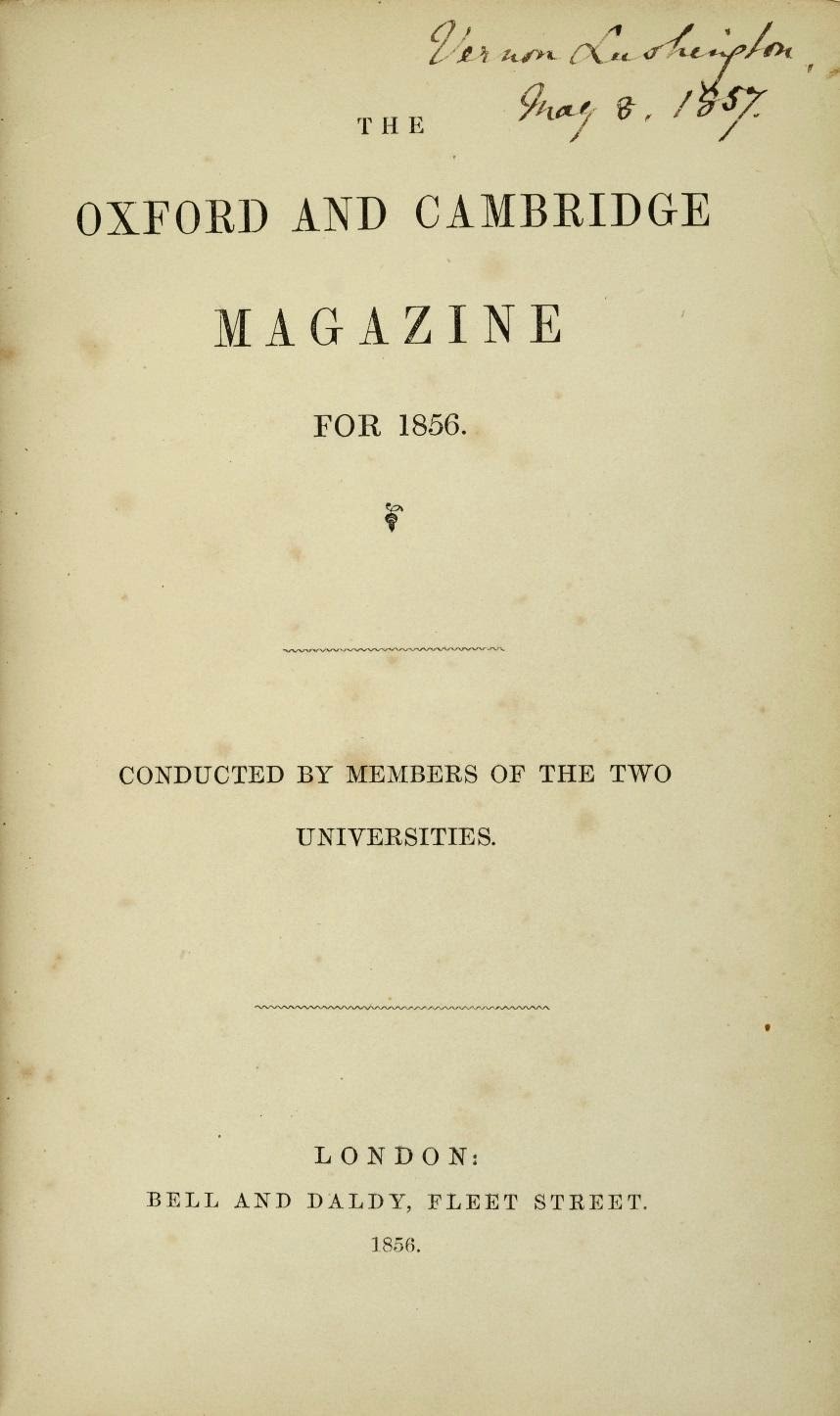 The twelve numbers of the Oxford and Cambridge Magazine that appeared in print, first under Morris’s editorship and financial backing, were conceived with the ‘central notion’ ‘to advocate moral earnestness and purpose in literature, art, and society.’ It was in this magazine that some of Morris’s first writings appeared together with contributions of verses by Rossetti. The names of contributors of individual essays are not printed leading to much debate as to attribution of authorships. I have been fortunate to acquire Vernon Lushington’s own bound copies of the magazine in which he has added the names of many of the contributors against the essay titles. From this we know that the essay on Oxford was by his brother Godfrey. In fact this was Godfrey’s sole contribution; Vernon contributing a series of essays on Carlyle which form an important, early, critique of the great prophet of the age.
Godfrey Lushington’s essay is not another eulogy on the glories of Oxford. He makes the point of the essay at the outset by quoting from Carlyle’s Life of Sterling, ‘Alas, the question of University Reform goes deep at present; deep as the world; – and the real University of these epochs is yet a great was from us.’
Reform ran deep in the veins of the Lushingtons. Their father had been a Whig MP with advanced ideas who supported the Reform Bill of 1832 and who strove for the abolition of slavery and other social ills. The call for University Reform voiced by Lushington in the Oxford and Cambridge Magazine amounted to an attack on the ‘social position’ and the ‘classed space’ that the universities represented at this time. The demands surprisingly came from young radicals such as Lushington and his brother who were themselves members of the very same privileged elite he was criticising.
Matthew Arnold, coincidentally a friend and neighbour of Vernon Lushington, elevated Oxford to a ‘sweet city with her dreaming spires’. Drawing upon the resources of newly discovered archive, I will look at the radical roots which lay beneath the veneer of Oxford’s romantic façade in the middle years of the nineteenth-century. I will consider the background of Lushington’s attack on the university system and the role that the Oxford and Cambridge Magazine in giving voice to that attack and its effectiveness in bringing about the changes that ultimate followed.  I will also show the importance of the magazine as a launching place for the pursuit of reform which can be traced throughout the brothers’ professional careers in the civil service and the judiciary. “

To contact the author about his work, email: david@taylorcobham.co.uk / davidcharles.taylor@surreycc.gov.uk