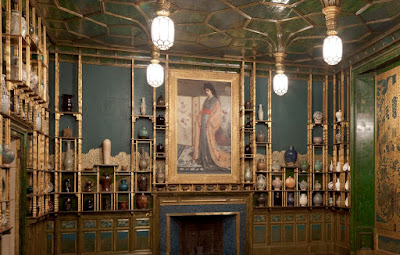 Aestheticism has often been defined as the religion of beauty, characterised by the celebration of art for art’s sake. Decadence, on the other hand, takes this to an extreme, finding beauty even in ugliness, decay and destruction. Filthy Lucreinspired by James McNeill Whistler’s masterpiece of interior design, the Peacock Room, is perhaps the clearest manifestation of the difference between these two approaches. Aesthetes may run from this room in floods of tears; decadents will love it

For in FilthyLucre,contemporary artist Darren Waterston has recreated Whistler’s original room, but with a difference. In contrast to the Whistler’s blue-green jewel of a dining room, structured by an intricate framework of golden shelves that line the walls (each of which houses an exquisite porcelain vase), in Waterson’s reimagining, utter destruction has taken place. The room looks like a bomb has detonated, or a particularly wild party has taken place. The shelves are crooked and crumbling, the vases are smashed or warped, golden paint dribbles down the wall and puddles onto the floor. The painting that hangs in the original, Whistler’s Rose and Silver: The Princess from the Land of Porcelain,has suffered a monstrous change: the female subject’s face has become a dark mass, bubbling up from the neck of her kimono. The surface of the canvas is spattered with filth and decay. This is the Picture of Dorian Gray,by way of Francis Bacon.

Waterston’s installation is essentially a nightmarish vision of contemporary decadence – an act of deliberate destruction wrought on an icon of nineteenth-century aestheticism in order to expose the hostility of capitalistic relations between the artist and the wealthy patron bubbling beneath the surface of Whistler’s shimmering glaze and gold paint. Filthy Lucre is in this sense the dark double of the Peacock Room, manifesting Whistler’s hatred and bitterness towards his patron, the Liverpool shipping magnate Frederick Richards Leyland. 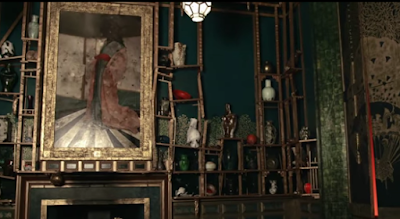 Throughout the 1860s, Leyland supported Whistler’s work and the two men became friends. Whistler painted flattering and affectionate portraits of Leyland and his family (these images are currently on display at the Freer alongside Filthy Lucre. In 1876, Leyland was having his London home redesigned and Whistler became responsible for the redecoration of the dining room (a task that originally fell to Thomas Jeckyll, who was indisposed by illness). Whistler became increasingly obsessed with his ‘Harmony in Blue and Gold’, departing from Jeckyll’s plans and creating the startling peacock-hued masterpiece we see today. But Leyland was not happy with the result, nor with the £2,000 price tag that Whistler demanded. Their friendship destroyed, Leyland coughed up half the money and Whistler left behind his own parting ‘gift’. On the wall at the far end of the room, he painted two golden peacocks; the one on the left, the poor peacock, mangy and beset, symbolic of the artist; on the right, the rich peacock, plumage on show and money at his feet. No prizes for guessing who that represents…

The animosity between the two men continued when, in 1879, Whistler was forced to file for bankruptcy. Leyland was his main creditor. Once again manifesting his rage in paint, Whistler gleefully portrayed Leyland as a peacock-human hybrid, in a work entitled The Gold Scab: Eruption in Frilthy LucreThis bizarre caricature depicts Leyland as a scaly monster, all claws and whiplash tail, playing a piano and sitting on a house (apparently Whistler’s), bags of golden coins piled up around him.

This painting, of course, inspired Waterston’s own title for his installation,Filthy Lucre or ‘Dirty Money’. It is also referenced in the disorientating sounds you hear on entering this enclosed space, as a discordant piano strikes up. The original fighting peacocks in Waterston’s version are now no longer squaring up to one another, they are ripping each other’s guts out. Beyond being a horribly literalised manifestation of Whistler and Leyland’s fight, the proximity of the two birds as they tear at one another’s flesh renders them symbiotic – mutually destructive but also intimately connected, as through a reciprocal umbilical cord. Thus, Filthy Lucrefunctions not only as a commentary on the creation of Whistler’s room, but also as a damning commentary on relations between art and money in the contemporary era. As Waterston himself has stated, his portrayal is affected by his own position as a twenty-first century artist – underfunded, fighting for patronage and support, and in this sense facing conditions not dissimilar to Whistler’s original crisis.