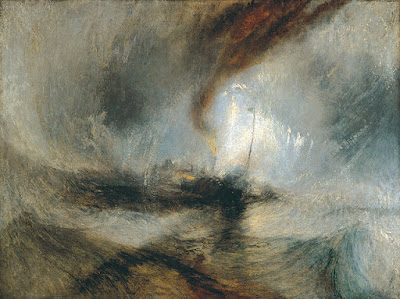 Yesterday I visited the Turner show currently featured at the de Young Museum in San Francisco. Titled “J. M.W. Turner: Painting Set Free,” it focuses on Turner’s work in the last 15 years of his life, including watercolors as well as oils, night scenes as well as blinding sunlight, and seascapes as well as fire and smoke (sometimes at the same time, as in Snow Storm: Steam-Boat off a Harbour’s Mouth[1842]).

The exhibition’s labels cited John Ruskin frequently as Turner’s first and best interpreter, and as the contemporary critic most presciently alert to Turner’s power and significance. This continual reference to Ruskin made me think of William Morris, and made me wonder whether and how Ruskin’s highly favorable view of Turner may have rubbed off on Morris, given Ruskin’s vital influence on Morris’s aesthetic vision.

In so many ways, Morris and Turner would appear to be opposed in their approaches to art. Morris revived the crafts – the “low” arts – as art forms in their own right; Turner painted for the Academy. Turner’s protoimpressionistic compositions offer nothing like photographic verisimilitude; Morris is associated with the Pre-Raphaelites, whose creed of “truth to nature” can be seen in Morris’s botanical designs. Perhaps most strikingly, there is a quality of abstraction and elementalism in Turner’s work that seems at odds with the ornamentation and lushness of Morris’s designs.

And yet, there are similarities too. Many of Turner’s paintings were originally exhibited with bits of poetry – often Turner’s own poetry, though Byron shows up frequently too – which reminded me of the Pre-Raphaelite tendency to weave together painting and poetry, and of Morris’s lifelong interest in visual-textual interplay. One room of the exhibition focused on Turner’s innovative approach to the shape of the frame and his experiments with square, round, and octagonal compositions, which brought to mind the crucial role of the border and the frame in Morris’s artistic work. There is, too, a hint of social criticism in Turner’s dazzling representations of smoke, fire, and disaster; these recall the ugliness of modern civilization that Morris so hated, as well as the impermanence and mutability of civilization that gave him hope.

After the exhibition, I looked for references to Turner in Morris’s writings and found surprisingly little. But Mackail’s biography of Morris includes a wonderful description of Morris reading Ruskin on Turner, reading aloud as though he himself were on fire:

Morris would often read Ruskin aloud. He had a might singing voice, and chanted rather than read those weltering oceans of eloquence as they have never been given before or since, it is most certain. The description of [Turner’s] Slave Ship, or of Turner’s skies, … were declaimed by him in a manner that made them seem as if they had been written for no end but that he should hurl them in thunder on the head of the base criminal who had never seen what Turner saw in the sky.” (46-7)

This anecdote reveals, perhaps, the most important quality that Turner and Morris shared as artists: a resolute appetite to challenge orthodoxy. Certainly this was a quality shared by Ruskin, too, and it is a quality that unites and triangulates the intersecting careers of the painter, the critic, and the craftsman.