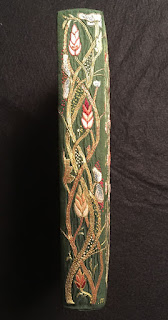 The William Morris Gallery in Walthamstow, UK recently hosted a two-day conference devoted to the life and work of May Morris (1862-1938), youngest daughter of William and Jane. May’s biography has often been overlooked and her work interpreted only as an aspect of the life of her famous father. But as the conference papers revealed, she was a remarkable designer, artist, and writer whose work contributed significantly to the spread of the Arts and Crafts aesthetic.

From her youth, May developed an interest in embroidery. She trained at the South Kensington School of Design and was appointed manager of the embroidery department at Morris and Company in 1885. She studied the history of embroidery and published a series of articles promoting the craft, culminating in the book Decorative Needlework (1893). In 1909-10 she embarked on a lecture tour of the United States, preaching on a variety of topics including the importance of the rich British tradition of embroidery.

Upon her father’s death, she edited a 24-volume compilation of his written work. Each volume of the Collected Works of William Morris includes an introduction in which May contextualizes the passages which follow through recollections of her father’s life. These reminiscences reveal her warmth and respect for him, as well as the manner in which her life was shaped by their association. A particularly revealing aspect of these lyrical descriptions is the love of the English landscape which they both shared.

May Morris’ creative debt to her father is without question. However, as revealed by the 13 speakers who presented over the course of this conference, she was a creative force unto herself. The two-day study event presented new research of May’s life and work in advance of an exhibition which will be presented at the William Morris Gallery in the fall of 2017. On Friday, conference attendees visited the Victoria and Albert Museum’s Clothworkers’ Center at Blythe House where Jenny Lister, Curator of Nineteenth Century Textiles and Dress, reviewed a stunning selection of May’s embroidery, including both her hand- and design work. These objects included a vine-and-leaf design table cloth made for the Hodson family of Compton Hall, Wolverhampton; the famous “Orchard” portiere designed by May and worked by Theodosia Middlemore for Melsetter House in Orkney; and the superfrontal designed by Philip Webb and worked by May. There were also examples of ‘starter’ embroidery kits, in which a small portion of the design was embroidered as a model for those clients who wished to carry out their own handwork. Of particular interest was a Morris and Company day book dating from May 1892-November 1896, listing orders placed with the company, often including the names of those who were responsible for the stitch work. For the second half of the day a riverside walk in Hammersmith was offered, including a stop at the William Morris Society.

On Friday evening the keynote lecture was given by Jan Marsh, who’s Jane and May Morris – A Biographical Story — the first significant investigation of May’s work — was published thirty years ago. Marsh gave an overview of May’s life and work weaving her various roles, interests and accomplishment into a compelling narrative. On Saturday lectures were presented on topics including May’s needlework; her role in the founding of the Women’s Guild of Arts; her critical writing; her relationship with Kelmscott Manor; socialism; her teaching at the Birmingham School of Art; the lecture tour of America; and the architectural project for Kelmscott village in collaboration with Ernest Gimson. A full conference program can be found here. These papers will be published through the generous sponsorship of the Friends of the William Morris Gallery in time for the exhibition in the fall of 2017.

A great deal of new information was presented, including the recent re-discovery of an embroidered book cover by May Morris in the collection of the Grolier Club in New York. The binding is of green silk embroidered with colored silks, gold braid and beads. It covers Ernest Levebure’s Embroidery and Lace (published London, 1888) as translated by Alan S. Cole. The book is a history of embroidery from antiquity to the present, a subject which would have been of particular interest to May. The initials E.L. and A.C. (assumedly those of author and translator) appear on the front cover. A tiny initial “M” is stitched at the bottom of the spine. The book is known to have been in the collection of Samuel Putnam Avery of New York City as early as 1891. Avery was an art dealer, collector, and one of the founders of the Metropolitan Museum of Art. The book’s presence in Avery’s collection suggests knowledge of May’s craftsmanship in the U.S. preceded her arrival by some 20 years!