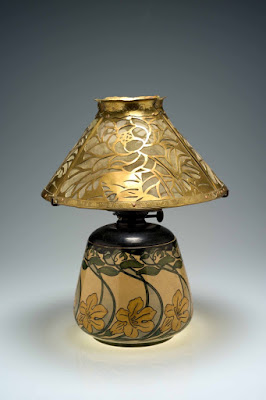 The Newcomb Pottery, active in New Orleans from 1895 to 1940, has long been regarded as one of the premier producers of American Arts and Crafts pottery. In addition, from its origins it attracted attention because all of its workers were women. The pottery was a division of Newcomb College, the women’s college attached to Tulane University. The exhibition “Women, Art, and Social Change,” co-sponsored by the Smithsonian Institution and the Newcomb Art Gallery at Tulane, brings together more than 125 objects for this traveling tour, which began in New Orleans in 2013 and concludes this October in Nashville.

The objects in the exhibition are uniformly stunning. Best-in-show may be the lamp that, in the installation at the Princeton University Art Museum in summer 2016, greeted visitors as they entered the galleries. The lamp’s base, in shades of yellow and green, features a repeated motif of cat’s claw flowers, while the cunningly designed shade, an irregular swirling outline of magnolia flowers, allows light to escape through the fine metal mesh on which the brass flowers are laid. The lamp embodies the best features of Newcomb Pottery wares: superb execution of sophisticated Arts and Crafts designs that almost always make use of Southern motifs, both flora (pecan branches, crepe myrtle, forests’ worth of Southern pines and live oaks) and fauna (dragonflies, bullfrogs, blue crabs).

A wall-sized photographic blowup in the first gallery showed the Newcomb craftswomen at work. In their sensible shirtwaists, they could be versions of Philippa, the female artisan in William Morris’s utopian novel News from Nowhere. The Newcomb Pottery enterprise had strong Morrisian dimensions. The insistence on hand-crafted products, the decorative motifs derived from natural forms, even the typeface used in printed materials—all have their origins in the work of Morris & Co. and the Kelmscott Press.

Post-Civil War New Orleans was, in general, desperately poor, and the opportunities for women artists—or women workers of any sort—were few. Pottery director Ellsworth Woodward, a graduate of the Rhode Island School of Design, had considerable ambitions for the enterprise: he wanted to promote regional pride, create distinguished art objects, and provide artistic, educational, and economic opportunities for women. “I am hopeful,” he said in 1901, “that we can here provide a livelihood for that large number of women who have artistic tastes, and who do not find the schoolroom or the stenographer’s desk or the [retail] counter altogether congenial.”

As the excellent accompanying catalogue by David Conradsen et al., The Arts and Crafts of Newcomb Pottery, reveals, only the ambition to create beautiful artworks was fully realized. Over its forty-five year history, the pottery employed less than one hundred women, most of them part-time, and it was not able to provide any of the artisans a stable, decently paid career. Director Woodward lured the Charleston artist Sabina Wells to Newcomb with promises of artistic freedom and handsome earnings. After she arrived, she wrote home in a letter, “I am much dissatisfied with the narrow style of design, but could stand it if I were paid for doing so, but without pay and without any prospects, I am almost in a state of open rebellion. I am supposed to be one of their clever designers & I will make this month $40.00 & last month $30.00–& that at a pottery where the theoretic pay is $100.00 per month!”

Wells’s letter lays bare some of the tensions at the heart of the Newcomb Pottery enterprise. Newcomb was supposed to provide a means of artistic expression of women, but it actually demanded a “narrow style of design” focused on stereotypically Southern motifs in order to satisfy marketplace demands. It promised economic independence for women, but as an acute catalogue essay by Adrienne Spinozzi reveals, Newcomb consistently underpriced its wares in comparison to other art potteries, as if embarrassed to claim too much on behalf of genteel Southern women.

The enterprise also exemplifed tensions surrounding gender in fin-de-siècle America. Newcomb boasted of women’s abilities in the decoration of pottery, but it did not advertise the fact that all its pots and vases were actually thrown by men. That gendered division of labor persisted until the enterprise was disbanded in 1940, with the exception of the jewelry and metalworking departments, which were added in the early twentieth century. The women in those fields both fabricated and decorated the products. A fascinating wall-sized photograph of the metalwork shop shows a young woman wielding an industrial-strength torch, her expression suggesting pride in her seizure of Promethean powers.

Two additional, fundamental tensions existed within Newcomb Pottery throughout its existence. The first was between the Pottery’s ambitions and its actual achievements. The enterprise was in part a utopian social experiment, a collective for women artists intended to challenge, in Morrisian fashion, the shoddy products of the industrial era. In reality, it was never more than a small regional workhop that produced a limited number of objects for affluent collectors. The second tension was central to the entire Arts and Crafts movement, from the establishment of Morris’s firm in 1861 to the closure of Newcomb Pottery in 1940. As Jackson Lears argues in his analysis of the Arts and Crafts movement in No Place of Grace, the craft revival was in part a form of antimodern protest, but it also accommodated itself to the demands of the capitalist marketplace and to existing hierarchies of class and gender.

Less than a triumph, far more than a failure—in its achievements and shortcomings the Newcomb Pottery enterprise exemplifies the inevitable tensions in the work of William Morris and his artistic heirs.