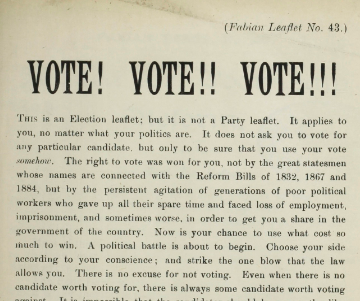 William Morris had no faith in electoral politics or its capacity to effect real change. As he wrote in Justice, following a Liberal parliamentary win in Hackney in 1884, “for the workers this is just a battle of the Kites and Crows.” While the Liberal press was exulting in the Hackney victory, Morris instead was “lamenting that, the Hackney Radicals, who have lately issued so Democratic a programme, should have been so blinded by the excitement of an electoral contest as not to see this fact.”
I admire Morris’s skepticism about the import of one Liberal victory; for me, however, living in a different time, and temperamentally less optimistic than Morris, his words produce little comfort in the wake of this past November’s election. In the months following the election of George W. Bush, I can remember being inspired and encouraged by Morris’s resolute commitment to a politics beyond electoral politics. But 16 years later, confronted with ever more urgent and intractable global problems such as climate change and the refugee crisis, and facing the quasi-fascist overtones of the rise of Donald Trump – it was Benito Mussolini, after all, who most famously rallied his followers around the call to “Drain the Swamps!” – Morris’s rejection of electoral politics has lost its power to inspire me.
For Morris believed in progress, and in this matter I find we are at odds. He believed that the arc of history was moving toward social equality, even if this progress moves, as he put it in “The Manifesto of the Socialist League” and “The Arts and Crafts of To-day,” in a spiral rather than a straight line. As we face the dawn of 2017, I can’t help but see this belief in progress – whether spiral-shaped or otherwise – as akin to religious superstition.
I find myself turning instead to the words of George Bernard Shaw – a political thinker with whom I am usually much less likely to agree – in his 1892 pamphlet Vote! Vote!! Vote!!!. “There is no excuse for not voting,” Shaw wrote, “Even when there is no candidate worth voting for, there is always some candidate worth voting against.” Contrast Shaw’s pragmatism here with Morris’s purism in response to the Radical vote in Hackney: “If they had no candidate whom they could vote for with a clear conscience, why should they have voted at all?”
It is important to note that Morris’s rejection of the ballot box was not entirely a retreat from electoral strategy. He went on to say, “Abstention from the poll accompanied by a protest so distinct as to make it obvious that the abstention was organised, and was the result, not of political languor, but of political insight, would have read a sharp lesson to those politicians, so called Radicals, who are hanging about waiting to see how the cat will jump.” We can hope that low turnout in the 2016 election will produce an effect similar to that which Morris describes; that we will see a turn toward more inspiring candidates, in the mold of Bernie Sanders, who represent a clearer alternative to capitalism as usual.
But we cannot wait about to see “how the cat will jump,” that is, to watch the course of events from the sidelines. I choose to dwell not on Morris’s rejection of the ballot box, but on his call for “a protest so distinct” as to register a vote of its own. January 2017 looks set to see some of the largest protests nationwide that have ever been assembled in the United States. Through protest, I will seek a new fellowship, and I will remember Morris’s words in A Dream of John Ball: “he who doeth well in fellowship, and because of fellowship, shall not fail though he seem to fail to-day.”
–Elizabeth Carolyn Miller,  Professor of English at UC Davis
For more thoughts on Morris and the election, I would encourage you to read this recent post by Eleanor Courtemanche.