Skip to content
“Mark Samuels Lasner is a genius of collecting, and he is a genius of connecting.” Elaine Showalter’s tribute to Samuels Lasner was part of her keynote address at the symposium “Celebrating the Mark Samuels Lasner Collection,” held at the University of Delaware March 17-18, 2017. The symposium, which marked Samuels Lasner’s donation of his extraordinary collection of Victorian books, manuscripts, and art to the University, accompanied an exhibition of highlights from the collection, which continues in the University Library through June 3.
Elaine Showalter, Professor Emerita of English at Princeton University, began her address with A. S. Byatt’s 1990 novel Possession, which includes a satiric portrait of Mortimer Cropper, a ruthless American collector of Victorian manuscripts. Samuels Lasner, Showalter hastened to point out, is no Cropper, and she praised the aptness of the exhibition’s title—not “Victorian Possessions” but “Victorian Passions.” Samuels Lasner, she said, is a passionate collector more interested in an item’s human interest than in its physical condition or monetary value. His genius for connecting is demonstrated not only in the way his collection places items within a dense narrative web of “creation, meaning, and history”—to use Samuels Lasner’s own phrase—but in his many connections to a range of people interested in the Victorian era, not only collectors and dealers but also librarians and scholars. “Of all the great collectors of Victorian literature,” Showalter proclaimed, “Mark Samuels Lasner is the best connected and the most fun.” 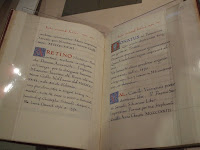 Exhibition curator Margaret Stetz assembled a variety of items from Samuels Lasner’s collection of more than 9,500 works of literature and art. Four that Samuels Lasner has identified as among his favorites are of special interest to Morris scholars. The most visually sumptuous is Morris’s illuminated manuscript catalogue of his book collection. Morris never completed the project—the eighteen extant pages list only some of the incunabula he owned—but the skill and time he lavished on the catalogue reveal that his passion for book collecting rivaled Samuels Lasner’s. 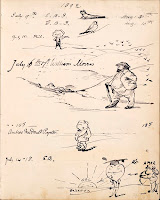 Another Samuels Lasner favorite is the 1881-1898 visitors’ book for North End House, Edward Burne-Jones’s seaside retreat on the Sussex coast. Burne-Jones, whom Stetz labels a “compulsive cartoonist,” decorated the visitors’ book with witty caricatures of his guests and family, including a stout, heroic-looking William Morris and a small, woeful Edward Burne-Jones. When the visitors’ book arrived in the mail from a dealer, out fell a drawing that Samuels Lasner had no idea was included but that is familiar to everyone interested in the Pre-Raphaelites: Burne-Jones’s drawing of himself in the Red Lion Square studio that he and Morris shared, engaged in decorating a massive medieval-style chair—a chair that is now just up the road from the Samuels Lasner Collection at the Delaware Art Museum in Wilmington. 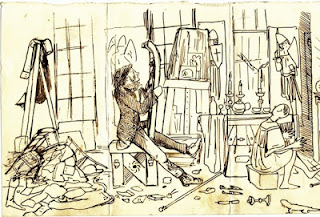 The fourth item is one of the newest in the Samuels Lasner collection, a book that only two years ago Samuels Lasner believed it would be “impossible” for him to obtain: a pristine copy of the Kelmscott Chaucer. This great work of art exemplifies the connections that Samuels Lasner values, representing a collaboration among Morris, Burne-Jones, the designers and artisans of the Kelmscott Press, and Morris’s beloved predecessor Geoffrey Chaucer. 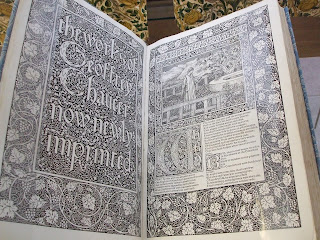 Ten speakers were featured during the symposium, all of whom testified to the Samuels Lasner Collection’s value to the study of material culture. Recalling her own academic training during the 1960s and 1970s, Margaret Stetz pointed out that both New Critics and post-structuralist theorists focused on texts, not books themselves; however, the past three decades have seen renewed attention to books and other material artifacts. Barbara Heritage of the University of Virginia’s Rare Book School offered a theoretically sophisticated defense of the importance of special collections at a moment when influential figures within the field of library science are arguing that, in the fully digitized era to come, books will no longer matter. R. David Lankes made that case in a controversial 2014 talk, “Burn the Libraries and Free the Librarians”; Heritage implied that librarians might want to keep their matches in their pockets.
Several speakers talked about how specific items in the Samuels Lasner Collection make important contributions to our understanding of the Victorian period. Joseph Bristow of UCLA discussed how two illustrated collections of fairy tales by Oscar Wilde broaden our understanding of Wilde’s career. William S. Peterson, Professor Emeritus of English at the University of Maryland, described his work in progress on the Kelmscott Chaucer, noting that the presentation copy in Samuels Lasner’s collection, inscribed to Robert Catterson-Smith, a Kelmscott Press designer, reveals the complex collaboration that produced an artifact Burne-Jones described as a “pocket cathedral.” David Taylor, an independent scholar from the U.K., focused on the correspondence of Vernon Lushington, a little-known but fascinating figure in Pre-Raphaelite circles. It was he who introduced Burne-Jones and Dante Gabriel Rossetti to one another, and his daughter Kitty served as model for Virginia Woolf’s Clarissa Dalloway.
Margaretta Frederick, Chief Curator of the Delaware Art Museum, described how her study of May Morris landscape sketches in the Samuels Lasner Collection opened up wider vistas on a figure increasingly recognized as a significant artist. She also discussed her research on the artist Barbara Bodichon, who will be the subject of a future exhibition at the Delaware Art Museum. Linda Hughes of Texas Christian University talked about her ongoing research on frontispiece portraits of Victorian women poets, drawing out the problematic relationship during the nineteenth century between the woman poet’s body and her body of work. Frequently, Victorian publishers avoided any visual representation of the woman poet by omitting a frontispiece. However, as the century went on and women increasingly and publicly put their bodies on the line in suffrage demonstrations, poets and their publishers more often included a frontispiece, dealing in a variety of ways with what Hughes called “the troublesome flesh of the female poet.”
Other speakers included Ed Maggs of Maggs Brothers, a prestigious London book dealer founded in 1853. In the course of a witty and affectionate tribute to his long friendship with Samuels Lasner, Maggs detailed the tribulations of the antiquarian book trade, but he also expressed optimism for the future. The millennial generation, he said, is on a quest for authenticity, demonstrated in their fondness for vinyl recordings and fixie bicycles. Their quest, he said, extends to books, and he predicted that there would be Samuels Lasner-like collectors yet to come.

The quest for authenticity and passion for material artifacts were vividly demonstrated in the talk by Mark Dimunation, head of the Rare Books and Special Collections division at the Library of Congress. In a series of entertaining anecdotes, Dimunation talked about some of the most significant and spectacular items in the Library of Congress collection, demonstrating the rich narratives and immediate pleasures that are at the heart of collecting, collections, and the Mark Samuels Lasner Collection.