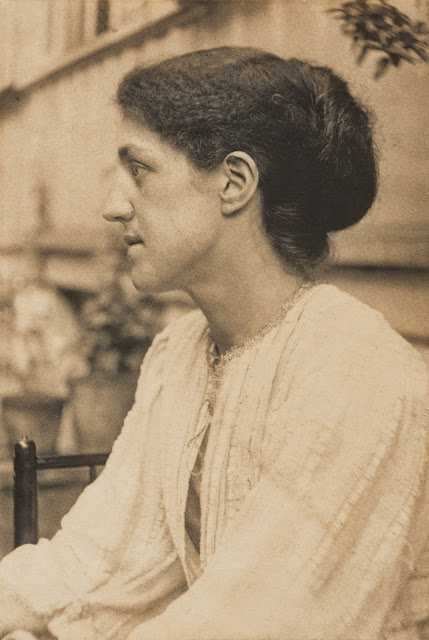 ‘I’m a remarkable woman – always was, though none of you seemed to think so,’
May Morris in a letter to George Bernard Shaw, 1936
This October The William Morris Gallery in London will stage a landmark exhibition  exploring the life and work of May Morris, the younger daughter of William Morris and one of the most significant artists of the British Arts and Crafts movement of the early 20th century. ‘May Morris: Art & Life’ will be the most comprehensive survey of May’s work to date and will bring together over 80 works from collections around the UK, many of which have never been on public display.
For more than 100 years May’s contribution to the decorative arts, in particular to art embroidery, has languished behind her father’s more illustrious career. The exhibition will reveal the breadth of May’s creative pursuits, featuring wallpaper and embroidery alongside jewellery, dresses and book designs, as well as sketches and watercolours, which May painted throughout her lifetime. The exhibition will tell the story of May, who at age 23 took charge of the Morris & Co. embroidery department and was responsible for creating some of the company’s most iconic textiles and wallpaper designs. It will focus on May’s role in the development of art embroidery – elevating needlework from a domestic craft to a serious art form – and highlight the extent of her influence in the U.K. and abroad, particularly the U.S.
Journal entries and letters will offer unprecedented insight into May’s extraordinary life. Thanks to the social circles in which the Morrises moved, May and her sister were exposed to a range of artistic and political influence from an early age. As a child, May would often model for her parents’ artist friends, who included Dante Gabriel Rossetti, Edward Burne-Jones, and George Howard, later Earl of Carlisle. The exhibition will reveal Rossetti’s fondness of May, and include a pastel drawing of May by Rossetti, on loan from Kelmscott Manor.
Through her father May was drawn into political activity in the emergent Socialist movement and was close to Eleanor Marx, George Bernard Shaw, and future Prime Minister Ramsay MacDonald. In 1907 she founded the Women’s Guild of Art as an alternative to the existing Art Workers Guild, which did not accept female members until 1964. Painter Evelyn De Morgan, jeweller Georgie Gaskin, bookbinder Katherine Adams and sculptor Mabel White were some of the earliest members of the Women’s Guild whose mission was to provide a forum for social and professional networking within the arts and in May’s words ‘to meet women who are not playing at art’.
The exhibition will position May as an integral figure in the British Arts & Crafts movement and explore her impressive career as a designer, embroiderer, writer and teacher. May exhibited widely in the U.K. and abroad and developed an international reputation for her historical knowledge of embroidered textiles and techniques, delivering a lecture tour of North America in her late forties.
The exhibition will coincide with the publication of May Morris: Arts & Crafts Designer,  which was co-authored by curators at the William Morris Gallery and the V&A, and will be published by Thames & Hudson in October 2017.
The breadth and scale of ‘May Morris: Art & Life’ will be made possible in part thanks to a crowdfunding campaign supported by the Art Fund, run on Art Happens– where the public have pledged £15,000 so far towards the exhibition. Although the crowdfunding campaign ended on 15 July we are still in need of further financial support to help make this show bigger and better. For every £100 more we raise, we can conserve and prepare another of May’s works for display. We can accept online donations via Paypal on our website.
–Rowan Bain, Curator, William Morris Gallery