In his essay “The Worker’s Share of Art,” published in his socialist newspaper Commonweal in April 1885, William Morris defined beauty as “the sign of free and happy work.” Following John Ruskin, he believed that the aesthetic surface of a creative work could reveal a deeper social totality, and the conditions of labor under which it was produced. The worker’s pleasure was, Morris said, the true font of art and beauty:

The chief source of art is man’s pleasure in his daily necessary work, which expresses itself and is embodied in that work itself; nothing else can make the common surroundings of life beautiful, and whenever they are beautiful it is a sign that men’s work has pleasure in it, however they may suffer otherwise.
For over a century now, Morris’s critics have wondered whether he was able to create such conditions of beauty and pleasure for the workers in his own decorative arts firm. In moving the firm to Merton Abbey in 1881, he hoped to create a guild-like setting for pleasurable collective labor, and yet, as biographer Fiona MacCarthy has discussed, Morris still maintained a tight control over the firm’s designs and “there was no serious attempt to bring out the latent creative talent of each workman.” While Morris’s workers were paid well, and the Abbey was unquestionably an agreeable place to work by nineteenth-century standards, the firm still fell short of Morris’s ideal of the craftsman-artist creating beauty through work-pleasure.
A new cultural site in Cambridge, U.K., however, raises the question of whether we ought to look not 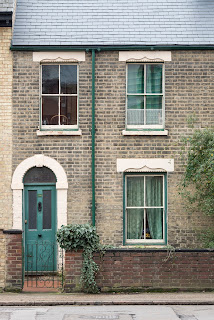 to Merton Abbey for evidence of working-class craftsmen’s pleasure in their labor, but rather to the private lives of the workers apart from their tasks for the firm. While we have precious little material evidence today to document how nineteenth-century working-class artisans felt about their labor, the David Parr House promises to shed light on this topic from the perspective of one of the artist-workers who made their living in Morris’s craft circles. The Parr House, at 186 Gwydir Street, Cambridge, is a pocket-sized monument to pleasurable craft labor, a workman’s cottage transformed into one man’s earthly paradise. It has recently been purchased by a group of trustees with the aim of opening it up as a museum in April 2019 after a period of necessary restoration and structural repair. A modest home even by nineteenth-century standards, it was transformed by Parr, who lived there from 1886-1927, into a splendid gallery of decorative painting and patterning – all done in Parr’s off-work hours, for his own pleasure, often by candlelight or lamplight. 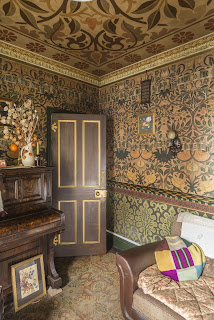 David Parr was an employee of the Cambridge firm F. R. Leach & Sons, which specialized in ecclesiastical interiors and took on occasional jobs for Morris & Co. Because Morris had a tendency to take on more projects than he had time to do, or perhaps to take too long with the jobs he had underway, he would often farm out work to other decorative arts firms, including F. R. Leach & Sons. Leach himself, to whom Morris reportedly appealed for business advice on how to run a firm, was the son of a Cambridge artist known for painting many of the city’s pub signs. His firm worked nationally but is especially remembered for several important projects in Cambridge, including the mural on St Clements Church and the chapel ceiling at Jesus College, a job that they took on for Morris’s firm. Prior to this important commission at Jesus, the Leach firm had successfully performed decorative work under Morris’s supervision at All Saints Church, across the road from Jesus College, and Morris was so pleased with their work that he engaged Leach with relative frequency thereafter.
David Parr was, as the census records put it, a “decorative painter” for Leach’s firm, and the influence of the grand interiors he painted during his workdays is visible in his own domestic artistry. Nearly every room of Parr’s house is meticulously painted in ornate, vibrant, and seemingly original patterns, many of which bear a close resemblance to Morris patterns or are modeled on Morris patterns but don’t mimic them exactly. In his notebooks, Parr detailed with precision all of the work that he did on his house, not so much to describe his inspiration or his feelings about the work, but rather to record the dates and details as to what was accomplished and when. We know, thanks to the notebook, that it took him 30 years to complete his marvelous, show-stopping parlor, and the trustees now suspect, reading between the lines, that Parr’s wife, Mary Jane, may have become fed up with the parlor being disturbed all the time during this long period. Clearly, stories within stories are waiting to be uncovered within this house.
The trustees of the house are working now to learn more about David Parr’s life, his family, and what may have motivated him to produce this stately pleasure dome within the private confines of his modest Cambridge cottage. They have learned that Parr was born to a laborer, and that he was orphaned young, with his mother dying when he was 5 and his father when he was 8. At age 16, Parr commenced working for Leach’s firm, and he was successful enough within that position to be able to buy his home at 186 Gwydir Street – a home that has a front garden as well as a back garden and was thus rather posh for a working-class cottage of this day. In addition to painting it in best Morrisian fashion, Parr also installed what must have been one of the first indoor W.C.s in the neighborhood (though the sanitary authorities made him re-do some of the drainpipe work to their specifications, all duly recorded in Parr’s notebook); he also built custom cabinetry for the house, and seems to have used materials leftover from some of the Leach jobs, such as stained window glass, to help him achieve his vision for the house.
After Parr’s death, his granddaughter, Elsie, came to live in the home with her grandmother; she was 12 at the time, and stayed there for the next 85 years, leaving the house just as her grandfather had created it. During this time, Elsie married and had two children. They lived always in the house, but respected Parr’s artistic legacy and left the house mostly intact, with his painted walls ever in view. Elsie’s husband, an avid gardener, made a paradise of his own in the back garden. In 2013, after Elsie’s death, a group of trustees led by Tamsin Wimhurst purchased the house, and they have since successfully applied for and received two Heritage Lottery Fund grants – one to conserve the house and protect it for future generations, and one to help generate an endowment. Because it is a very small space, and fragile, the Parr House can never accommodate a large enough public to support the museum on admission fees alone, but the endowment will allow the trustees to keep it open for years to come and to engage in public outreach through their website — http://davidparrhouse.org/— and through collaboration with the Victoria and Albert Museum and other local and national sites for Arts and Crafts heritage and working-class history.
It would be wrong to conclude from this house, of course, that the typical nineteenth-century, working-class craftsman in the circles of Morris’s firm was so enamored of his labors that he wanted to continue performing them at home, without pay, for his own pleasure. Surely David Parr is an exceptional figure, an outsider artist possessed of rare aesthetic ambition and an unusual drive to create. Despite the fact that he was working in the privacy of his own domestic space, with his home as his canvas, a decorative banner painted along the upper border of his parlor walls suggests that Parr’s motivations were similar to those of many better-known artists: he wanted to create something beautiful and permanent that would live on after his death. The banner reads:
Swiftly see each moment flies,
See and learn be timely wise,
Every moment shortens day,
Every pulse beats life away,
Thus our every heaving breath,
Wafts us on to certain death,
Seize the moments as they fly,
Know to live and learn to die. 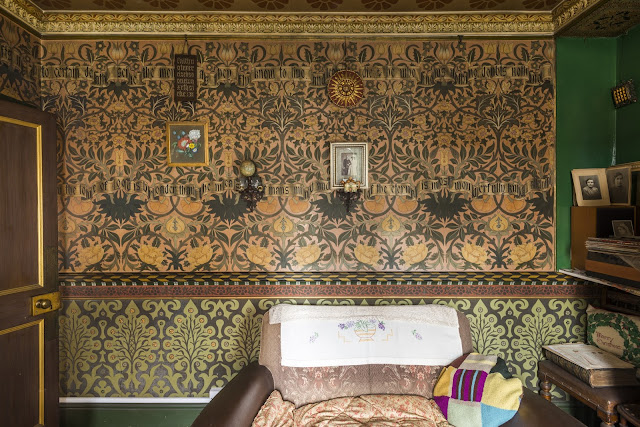 In the context of Parr’s astonishing home, this verse, a popular bit of Victorian rhyme, is transported and elevated from cliché to grandeur. We have precious few records of how working-class artisans felt about their work, or what they gained personally or spiritually from its creation, but the poignant pleasure that Parr took in his own work is quite literally written on the walls of this remarkable house.