Having grown up in rural Vermont, I have been enthralled with William Morris’s News from Nowhere since first reading it. Yet “rural” Vermont isn’t quite right. Like Morris’s Nowhere in the years immediately after the revolution, my hometown was marked by both recently collapsed industry and continued agriculture. Unlike, say, Middlemarch – the novel that first drew me to Victorian studies – with its picture of provincial life as a  mingling of manufacturing and farming, News from Nowhere spoke to my own past, one where agrarian and craft labor had begun to supersede industrial production. Above all, however, Nowhere’s folk mote – a utopian form of community self-government — resonated with my experience of progressive politics within a small community where town halls still determine public policy.
More than an accessory of some pastoral idyll of New England, the town halls of Vermont share ideological roots with Morris’s folk motes. Both stem from a desire for what the fin de siècle socialist John Morrison Davidson called “Politics without Politicians” – local direct democracy, or, in the Socialist League’s terms, “management.”
To model such local management, Morris recuperated the folk mote. Believed to be the primary mode of British governance prior to the Norman invasion, the mote represented to ictorian advocates of local self-governance a model rich with associations of Anglo-Saxon self-determination and anti-centralism. Until the 11th century, the “moot” served as an assembly wherein a locality’s citizens would collectively deliberate upon courses of action affecting the entire community. For localists like Joshua Toulmin Smith and Morris’s contemporary, George Laurence Gomme, the moot was both the common-law origin of local government and, accordingly, a model for local self-governance in the present. Gomme’s Primitive Folk-Moots, for instance, recuperated the mote for present-day government reforms, largely because, as constitutional historian Williams Stubbs put it, “in the shire-moot, we have a monument of the original independence of the population.”
In his romances, Morris likewise resurrected the moot. The House of the Wolfings makes the “folk-mote” into the vehicle whereby “the whole Folk . . . must determine what to do and what to forbear doing.” Accordingly, two pivotal chapters — “They Gather to the Folk-Mote” and “The Folk-Mote of the Markmen” – detail the collective deliberation by the men of the Mark over who will lead them into war. Similarly, The Well at the World’s End’sculminating battle commences only after a shepherds’ folk-mote collectively decides to band together and join Ralph in overthrowing tyrants who have taken over Upmeads in Ralph’s absence.
Morris also grounds News from Nowhere’s future, utopian “pure Communism” in the village-mote. As Hammond explains, “Matters Are Managed” in Nowhere through motes localized in “units of management, a commune, or a ward, or a parish.” They work thusly: “some neighbors” want “a new town-hall built; a clearance of inconvenient houses; or say a stone bridge substituted for some ugly old iron one.” The whole community debates if the parish will pursue such a project at an “ordinary meeting of the neighbors, or Mote, as we call it, according to the ancient tongue of the times before bureaucracy.” In utopian Nowhere, that is, Britain’s archaic governing institution, once flourishing before the rise of representative government, offer “pure Communism” what Guest calls something “very like democracy,” the means whereby the community decides which collective projects to pursue. It is through the mote, in other words, that “the whole people is our parliament.”
While in 1891 such localized direct democracy remained either in Britain’s ancient past or utopian future, the 1894 Local Government Act offered agricultural laborers an institution capable of revitalizing the mote: the Parish Meeting, a mode of rule whereby smaller communities could govern themselves without elected representatives. The English Land Restoration League’s Red Vans served as a crucial means for promoting agrarian radicalism. Launched as a get-out-the-vote campaign for agricultural laborers, the Red Van’s tour centered on the village meeting. According to the 1891 Red Van report, each tour proceeded by “select[ing] a comparatively small area, and work[ing] a county . . . thoroughly by means of village meetings.” The following year’s report further specifies that “It has been the aim of the Executive to promote, in each county, the establishment of a strong, solid, self-governing union of labourers . . . No opportunity has been lost upon urging the labourers . . . that their first duty is . . . to take into their own hands the management of their own affairs.” 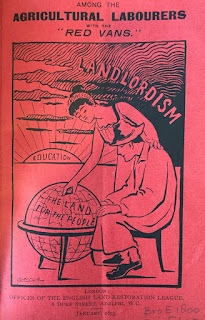 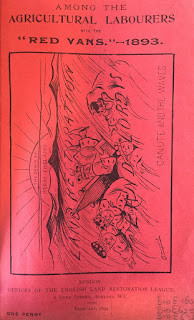 The nearly 500 village meetings in 1892 alone offered occasions for agricultural laborers’ deliberation on their collective needs and desires. The ELRL saw the village meeting as modeling the localized public sphere it hoped would remain in effect after the Van left town. Participants in these meetings would thereby practice the type of self-organization and management needed “to produce,” in the 1894 report’s words, “anything more than a mere ripple on the surface of village life.” Meetings modelled the practices of “County Unions,” which were to be “democratically constituted, managed by the labourers themselves.” Understandably, after the 1894 LGA the Red Vans promoted the Parish Meeting as the ideal institution for local self-governance – the Villagers’ Magna Charta’s detailed outline of the 1894 Act largely reprints an ELRL leaflet and, in turn, the Vans distributed Davidson’s tract beginning in 1894.

From sanctuary cities to minimum wage reform, the local has once again assumed prominence in politics. And while Bernie Sanders’ call for progressive local politics and the Democratic Socialists of America’s recent successes in municipal elections are heartening, I worry that these efforts might reiterate the metropolitan-rural divide characterizing national elections in both America and Britain (as evidenced by the 2016 presidential and Brexit votes, both of which followed a marked left/right, city/country divide). Morris’s mote and the ELRL’s village meeting offer two models for grassroots rural radicalism, models with existing frameworks in places like Vermont. Rural town halls, after all, offer one venue for realizing a “politics without politicians.”