Skip to content
The William Morris Society in the U.S. is pleased to award the 2019 Dunlap Fellowship to Rebekah Greene, a Marion L. Brittain Postdoctoral Fellow at the Georgia Institute of Technology (where she is also the Assistant Director of Assessment for the Writing and Communication Program). Here is Dr. Greene’s summary of her project:
Following in the footsteps of scholars such as Rosalind Williams (The Triumph of Human Empire: Verne, Stevenson, and Morris at the End of the World) and Stephen Arata (“Stevenson, Morris, and the Value of Idleness”), my work has recently evolved from closely studying the works of Robert Louis Stevenson alongside his interests in art and aesthetics to more broadly considering how Stevenson and his close circle of intimates thought about issues of education, world affairs, and improved rights for the working classes. Learning more about the connections between the Stevenson family and their interest in the revitalization of the Christian Socialism movement in the US led in turn to my learning that Stevenson, a fan of William Morris’s poetry and translations for at least 20 years, sent a letter expressing his admiration to Morris in 1892. In further considering the connections between Stevenson, Morris, and the leaders of the Christian Socialism movement in Boston in the 1890s, I became fascinated by the ways that Morris’s visionary writings on society and the treatment of the workers under his charge at operations such as Morris & Co. influenced Stevenson’s own political engagement during the final stage of his life. I now find myself shifting towards a new project as a result, one dealing with the impact of Morris on the Christian Socialism revival in the 1890s. 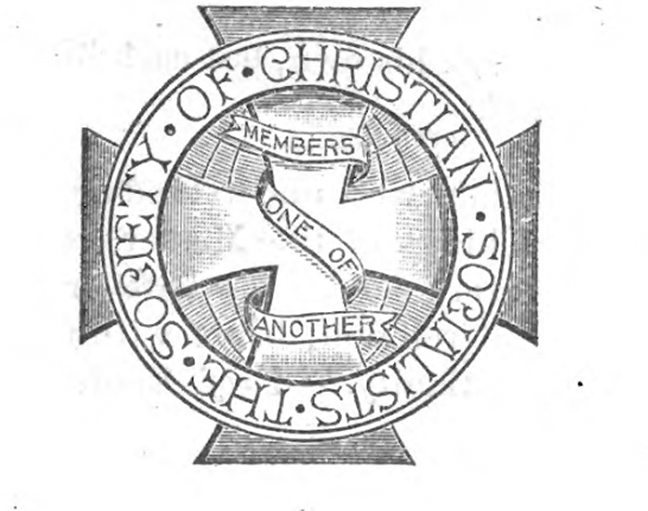 Logo of the Society of Christian Socialists (founded 1889), initial publishers of The Dawn
I would like to use any funding provided by the Dunlap Fellowship to support my travel to the 2019 Modern Language Association conference in Chicago, IL and to the Harvard Divinity Library. During the 2019 MLA conference, I will be presenting a talk in the William Morris Society sponsored session William Morris: Reflections on Art and Labor. This project explores the ways that Morris’s work as a business owner and as a political thinker intersected, providing inspiration for a revival of the Christian Socialism movement in the United States, especially the founder of The Dawn newspaper, Rev. W.D.P. Bliss. Drawing upon lectures and editorials by Morris—“How we live and how we might live,” “True and False Society,” and “The Society of the Future”—I investigate the ways that Morris’s beliefs that workers might be able to build a more effective, healthier, and robust future society directly impacted not only the mission but the design, publication, and distribution of The Dawn during its existence (1890-1897). In my talk, I suggest that Morris’s appeals for increased rights for workers in particular were pivotal to the development of a radical political and literary trans-Atlantic exchange of ideas culminating in the work of W.D.P. Bliss in revitalizing the Christian Socialism movement in America. 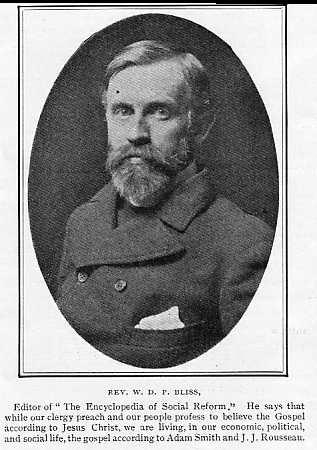 In reading the introduction to William Morris and the Twenty-First Century (2010) by Phillippa Bennett and Rosie Miles we are reminded that “[p]hysical and psychological wellbeing, a healthy environment, social justice, meaningful work, beautiful buildings, a dynamic art and literature are never, for Morris, isolated areas of concern: they are so thoroughly interrelated that failure in one sphere is inevitably related to failure in another” (7). Indeed, the commitment of Morris to social justice, fair rates of pay for laborers, and a healthy work and living environment captured the attention of both British and American labor activists and religious leaders on both sides of the Atlantic. Interestingly, Morris also suggests that more fortunate members of society also are responsible for transforming society, observing that for many, “they know that the poor exist” (394). Morris, in these particular works, argues that all have a duty to improve society, not just the working classes. “Feeling for the poor” (to use Carolyn Betensky’s term) through occasional charitable acts or small donations is not enough for activists such as Morris or Bliss. They both continually advocated throughout their careers for a fuller understanding of the political, public, and private spheres, as well as a more active, individual commitment to transformation of both the individual self and the overall human condition. 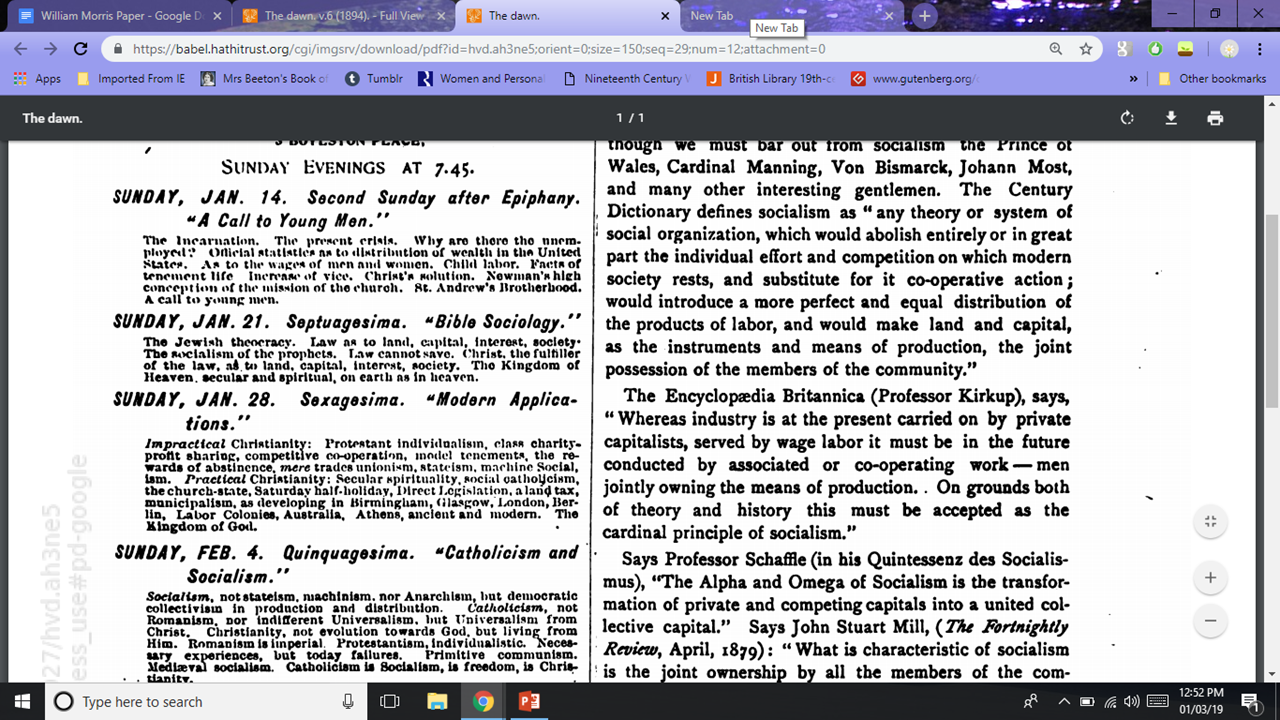 Digitized page from The Dawn

One of the special challenges associated with this project is the fact that while much of The Dawn has been digitized and made freely available via HathiTrust.org, several volumes allegedly digitized are, in fact, missing. Traveling to view the missing volumes at the Harvard Divinity Library will be essential in aiding me post-MLA as I complete the finalization of an article that I currently have under preparation relating to the influence of Morris on the efforts of W.D.P. Bliss in revitalizing the Christian Socialism movement in America. In the end, the work completed in both the MLA paper and the article will further understanding of the true trans-Atlantic impact of Morris on the working class in America, especially on the organization and development of educational programs for workers in the United States amidst the turbulence of the 1894 Pullman strikes.